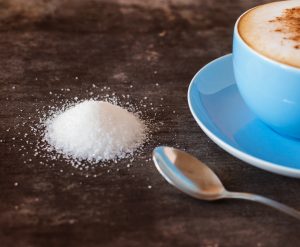 Almost everyone loves it – that sweet taste that relies on the taste buds located on the front of the tongue. That’s why we love licking our ice cream cones!

Problem is “sweet” too often comes with added calories, some call empty, that we may not need or want, especially if we are prone to gain weight and become obese. So, how have we satisfied the quest for “sweet” without those unnecessary calories?

Well, we have relied on artificial sweeteners. What are they?

#1 – Saccharine is the sweet powder we find secured in a pink paper packet or in liquid form to be used in minute drops. This stuff is powerful! It is about 300-400 times sweeter than the natural sweetener sucrose. Another the reason for the size of the dose is that in large doses it tastes bitter.  Moreover, with Saccharine, the sweet lover gets no food energy, unlike with natural sugar, and no nutritional value. Saccharine was first introduced in 1907, so it’s the oldest of the artificial sweeteners. Due to the possibility of allergic reactions, however, it is not recommended for infants, children, and pregnant women.

#2 – Aspartame was the next artificial sweetener to make its entrance in 1965. It is commonly known under trade names NutraSweet, Equal, and Canderel. It comes in a blue packet and pulls a lesser sweet punch at 180-200 times sweeter than sucrose. Aspartame has a caloric value of 4 kilocalories of energy per gram, which is so small that the caloric effect is negligible. Many have claimed negative effects, such as panic attacks, mood changes, memory loss, hallucinations, tremors, ADHD, fluid retention, excessive thirst or urination, or painful urination, etc. The most common side effect, however, is headaches. One study at PubMed found that Aspartame converted to formaldehyde in some body tissues. Isn’t that what they use to embalm dead bodies? How then could it be healthy for live ones?

#3 – Finally, the last popular artificial sweetener, Sucralose, arrived on the scene in 1976. Its commercial name is Splenda, and it comes in the yellow packet and is a powerful 600 times sweeter than sucrose. A serving of Splenda is 3.36 kilocalories. That’s 31% of a serving of granulated sugar, but the caloric effect is still so small as to be negligible. It can be labeled “zero calories” if the serving is less than 5 calories, according to FDA Regulations. Some studies claim that Sucralose may increase blood pressure and insulin levels, may be harmful to gut health, and could possibly be toxic when heated, leading to cancer and infertility in men.

Are there any low-calorie, healthy, natural sweeteners available? Thankfully, yes.

Xylitol is sugar-free sweetener, a carbohydrate found naturally in the birch tree and in some kinds of fruit. Nearly as sweet as sucrose, it has fewer calories. People with diabetes use it as a sugar substitute because it helps regulate blood sugars due to its slower absorption into the body. Xylitol is sometimes used in toothpaste and mouthwash because bacteria that reside in the mouth cannot use it as a source of energy, like it can use regular sugar. Consequently, it may help prevent tooth decay and the buildup of plaque that leads to gum disease.

Swish Mouthwash is available from cleankiss.com. It is part of a complete oral care system and is only one of the healthy ingredients formulated for this product. Other blogs will feature other ingredients of Swish Mouthwash one-by-one.

About the Author: Karen Lohrengel

Karen Lohrengel is founder of Angel Copy Right. She holds a Master of Arts from Arizona State University and writes for Web and print media. Trained by American Writers and Artists, Inc, she currently specializes in the health and wellness niche but also has experience writing ad copy in a variety of other business environments.